While this weekend I spent most of my gaming time in wow, I did mange to squeeze out a little non-wow gaming.Â I started with Brother’s in Arms: Hell’s Highway; why have I not played this before?Â Â This game feels like a cake made by mixing some FPS with a puzzle game with a handful of story.Â I have a few issues with it, but over all I am really enjoying the experience.

I also played a bit of a ‘super’ mmo beta, that I shall not yet mention.Â I do have a post post with some thoughts that I will post at some point.

And I also played a tiny bit of EQ2, right before my trial account ran out.Â I had fun.Â No really, I enjoyed the game and if it did not have a monthly fee I would probably keep playing itÂ a bit here and there.Â Â Alas it does have a fee, and I already am invested in my friends and characters of WoW.Â Â Though if I my friends and I ever leave wow, and EQ2 is still kicking, I could see trying to convince them to come play.

This weekend our raiding group was a bit odd, in that we were short several of our regulars. This left us scrambling to fill some DPS slots, which we eventually did but it was a bit on the stressful side getting it all together.Â Â How did we end up doing?Â

We started out clearing ulduar up through mimiron, and then we tried thew new Trial of the Crusader 10 man.Â It took a few attempts and it was sloppy but we beat the only currently active encounter.Â Â It was a pretty fun night once we got going, we all enjoy clearing bosses quickly and the challenge of the ToC10 was fun.

Then on Saturday night we downed the general, and started our Yog attempts for the week.Â It took a few, but we finally did it. 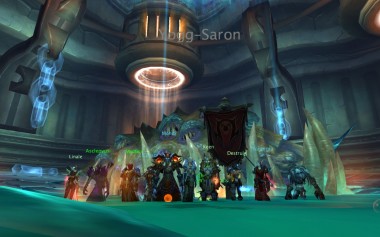 We finally got Yog Sarron 10 down

It was a great feeling to see weeks and weeks of work finally come together with this.

As for loot, I lost the roll on a nice belt in a tie! That is the third time in a year, twice in the last month that I have lost do to a Tie.Â I don’t mind losing but a tie loss is dumb.Â The should really, just have the game auto re-roll ties and display those results.Â It the same result but at least I would feel a little better.

I did win the roll on the chest token from yog, the glove token from someone else, and get enough conquest emblems to buy the helm token.Â Now I need to spend some gold and get them all gemmed, and the sad part is they are not really much in the way of upgrades. Yes they are better in some ways, and worse in others.

The level of complexity that gearing becomes when you are raiding is nutty, to the point that most classes have spreadsheets built to help properly gear up.Â Â Â All I know is my biggest upgrades are going to come from 25man runs which at this time simply am not running.

I did feel a slight mana strain.Â I am not really sure why they even bothered changing those mechanics when they could have ‘simply’ designed boss encounters to strain mana more.Â I did notice the loss of PoH power, but as normal the ‘group’ and range limitations of the spell hurt its effectiveness more than loss of power.

Our pally healer, who is an awesome player, and I did notice how buffed Beacon of light is now.Â And even though Illumination was reduced, he still had plenty of mana because beacon reduced the overall needed healing.

Oh, I finally did run the Trial of Champion 5man instance a few times. In it, I saw something that made my jaw drop; a new lightwell.Â Apparently the NPC dps are even worse at wanting to click on the well for healing, so the one their priest cast had healing bolts of light splashing out of it.

Time to go do more dailys and raptor camping.