I have little back stories for almost all of my MMO characters rattling around in my head. This time I thought I would take a quick bit of time and record a rough idea I have for my first Champions Online (retail) character. 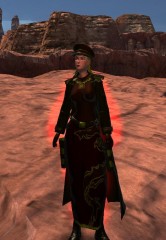 Captain Alyxa Marks, code named Patience for named for he ability to wait her enemy out, is a reluctant resident of our world.

On Atheria she was Captain of the skyship Remorse, a pirate hunting ship of the Imperial Navy, and one of the most fear ships in the criminal world.Â She was the youngest appointed captain in the fleet and quickly earned her crew’s respect during an amazing action capturing a pirate vessel on her first sailing.

That was ten years ago, since then the Remorse has captured or sank more enemies than any ship in the Empire’s history.Â Such actions have made the Remorse and her captain targets of the entire criminal underbelly, and in particular a man known only as The Doctor have vowed unspeakable things be done to Patience, her crew, and anyone they care about.

Patience and her "Twins"

That vow led to an incident, one in which saved her world but should have killed her and her nemesis, that landed Patience on earth.Â She does not speak of what happened, only that her world was saved.Â Of course if she is alive then so is the one she has spent many years and many of her crew trying to stop. Not only alive but one again free.

Lucky for Patience, the transportation to this world did not disrupt her power boots allowing her to fly.Â Â More importantly she held onto the trusty twins, her father’s specially designed pistols given to her as a child when he was lost in action,Â with out them she my have have had the will to once again stop The Doctor.

She misses her world, her ship, and her crew, but she can only worry about returning after The Doctor is found and dealt with once and for all.Â Â Until then she will play her part as one of this planet’s ‘heroes’.