Yesterday I stumbled upon a FlyFF and Rappelz, both of which are several years old and yet for some crazy reason I downloaded them.Â Today after installation and account creation I played both for a very short bit, during which I took a few notes.

I think I made it about 20 minutes into this before I quit.Â Right from the start this game threw stuff at me that I don’t like. 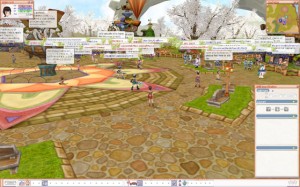 If I was running that game, the first day on the job I would propose to remove the player stores from the starting area.Â Here is what it looks like currently:

Next I would push to add some sort of filtering system on chat, or at least an ignore system, anything to limit the mass amount of chaos a new player faces in chat.

I have not uninstalled it yet, and maybe (only a tiny chance) I will go back and give it another try.Â Though I saw very little offered in that game that I could not get from Runes of Magic.

This game I played for more than an hour, maybe close to two.Â Granted a lot of that was reading the tutorial text and running from place to place, but it presented a much better first impression than FlyFF.

The starting area only had a few “player stores” and since most my time there was spent outside the starting village I was able to mostly ignore the chat spam. 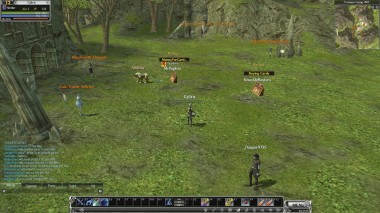 The game did a good job leading me by the nose and teaching me their mechanics, in a much more cleaned out setting.Â Â Â Of course I have no idea if the game has some sort of built in restrictions, or if FlyFF is just that much more popular that the starting areas are shanty towns.

Also note that not only does Rappelz lack any control customization, it offers zero keyboard movement controls.Â Â Which oddly, did not bother me as much as the game that offered KB movement with out customization.Â I suspect this is because without keyboard movement being there, my hand was not even resting on the keyboard.Â Â Left click to move, double click to start auto attack, click on shortcut bar to activate skills, all with one hand.

Sadly, only the character animations being good, and the camera shake on critical hits, have made the game the slightest bit interesting.Â As a player I do not feel as though I am doing anything exciting with my character, instead it all just point and click. 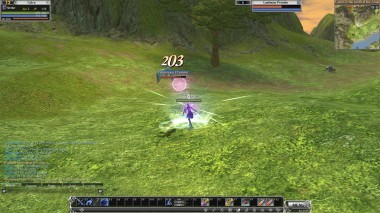 Controls aside, it did not come off a s “teeeerrrrible” free game, but again I say there are more polished free MMO options out there.Â So I suspect Rappelz might be one more session before it is shown off my computer.