Yesterday I made a quick list of some three hour impressions. Well I did go back last night and played for another four or so hours, and had a pretty good time.Â Thus now with a total of about eight hours of Aion and leveling my cleric up to level 11, I thought it would be a good time to record a few more impressions.

The game’s PvE system feels very linear.Â Unlike World of Warcraft or Lord of the Rings Online, there is only one starting area per faction. So every character of a faction will start and progress through the exact same series of quests. 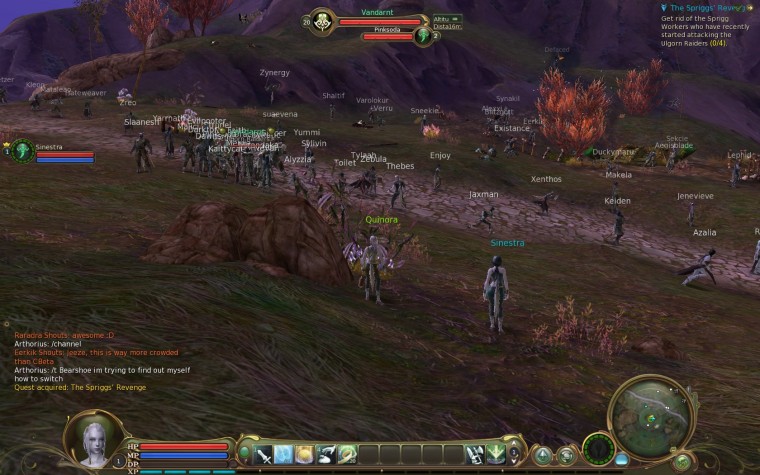 This is basically the same system as Guild Wars uses for new characters, and its dull to me.Â Sure after you have played a couple of characters you will be zipping through that newbie zone fast, but I like the small bit of variety the starting zones in those other games offer.

Worse though is the fact that the next area seems to follow the same linear design.Â Thus far I do not see any indications of branching zone progression. What I mean is at any given level range there looks to be only one place you will be generally questing in.Â Again such a system does not encourageÂ me to roll an alt and explore other zones and quest lines, though it does mean that most players will see all the created content. More efficient for the designers, but I believe it leads to a more narrow and dull world.

And while repeated play throughs might be dull, they will certainly not be ugly.Â This game oozes style and beauty.Â Its a different kind of beauty from, say, Lotro landscapes and vistas, WoW’s stylized cartoony, or even guild wars’ elegant characters.Â No instead its sort of a mash up of all three, and it works very well.

While the basic questing and combat mechanics are very familiar requiring little instruction, I am still at a loss for how some other mechanics work. Such as:

Some of those I discovered simply by going through all my available menus, but most of them I still don’t have answers for.Â Â I suspect most of those are questions players will have to have other players answer, and I think that is “bad”.

Aion thus far has not offered me anything other games don’t provide.Â And as a fantasy subscription game it does not offer me enough to abandon the investments I have made in my characters in other games.

On the flip side its not bad, actually its pretty good, and if my friends and I wanted a fresh start in a fantasy game I might consider it.Â Heck if it followed the F2P model like Runes of Magic and Free Realms, I know I create a character after launch and play now and then.