Reflect arrived at Hate’s Envy a bit dazed and confused.Â You see it the teleportation spell that brought him here had the ill fated side effect of selective amnesia.

Thus he accepted his orders and proceeded to step outside the wooden palisade, which marked the safe area of Hate’s Envy, and began to punch at small creatures of stone.Â The officer called them elements, but Reflect thought of them as fodder.Â There were many more of the creatures than the officer asked Reflect to defeat, and many more kept appearing, a fact which unsettled Reflect.

Next up the officer wanted him to help reduce a growing wolf pack that was now surrounding the back part of the outpost.Â Reflect agreed, but before leaving saw another man beckoning him.

“You going to kill some wolves?” He asked, and reflect nodded.Â “Good, good. If you bring me their hides I can rewarded you.Â Sound good?”

Reflect nodded again, smiling.Â He could do one job and get paid twice.Â Money in his pockets, new equipment, and he was starting to recall more things he knew how to do.Â More ways to fight and defend himself.Â Yes, this would be a good day.

After my first two installments (1, 2) describing my most recent return to EQ2, the above was howÂ the first few minutes of actual adventuring started for me, as Reflect.

The voice overs from the quest givers was nice, it did add something to the game.Â I am not sure what that “it” was but it stood out, and when NPC did not have voices for everything it felt odd.Â This made me think of all the recent talk about Star Wars Old Republic being a fully voiced game, and how much work that is going to be.Â Â Not just for launch, but every time they add NPCs or quests.

The next thing that jumped out at me, was the quest dialog system, it was simply and natural.Â ItÂ did not take me out of the game world and presented all the information I needed.

The quest journal itself is functional; provides sorting of quests by name, current zone (I suspect that means which zone the current quest step is for),Â level , and category.Â Selecting a quest and you can read the quest text, objectives, and rewards.

Alas after playing for while I reflected back on the types of quests I encountered and realized that there were only a few basic templates.Â Â At about 20 minutes of gameplay I was level 5, and had seen 4 basic types:

And after ninety minutes of play quests based on those same four templates led me to a second quest hub and up to level 11.Â Â Â It was only after exiting the game that I realized that it had only used 4 templates of quests,Â thus even though MMOs have this ‘problem’ I made a note to mention it.

The basic explanation of combat is: Target something, move within range, activate abilities when you can.Â The only thing that stands out is the “Heroic Opportunities”.

The first time I saw something like this was in FFXI , and the idea is you use one ability to start a chain of attacks that have an additional affect depending on the order of the chain.Â When soloing your options for the chain are limited, but when in a group the attacks made by members contribute to the chain, allowing for several more options.Â Â Â Its a concept that EQ2 refined from FFXI, and that Lotro has also implemented.Â It rewards coordinated group combat and provides solo combatants a bit more power.

I have rather enjoyed my solo combats thus far, though I wish the cooldowns were a bit faster on my attacks, or that I had more.Â As a bruiser I have several abilities that provide nothing when I solo,Â thus limiting the number of active abilities I have at any point in combat.Â If the abilities I did have were ready faster even justÂ by a second or two, I would feel so much more potent.

The game at the surface is rather easy to follow, but once you dig a bit there is a whole lot going on.Â Take these tooltips: 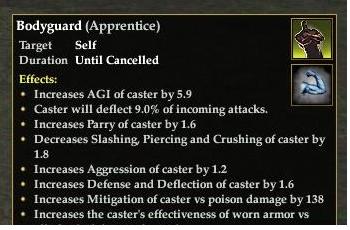 Look at all that stuff on that tooltip 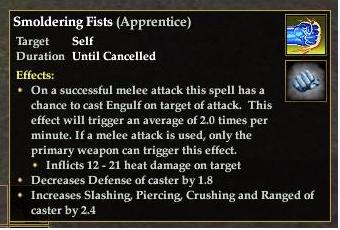 Again more info, yet nothing saying it wont stack.

Each of them have a list of of things they do, but neither of them say anything about those abilities being active at the same time.Â So I tried them both, and one you activate one the other one can not be activated.Â They present to me a choice of which “mode” I want to be in.Â I feel with as big as their tooltips are now, they would have room to add a keyword (like aura, or stance) to indicate their how they functioned.

Another example is the achievement point system.Â At level ten you getÂ message saying you can now earn Achievement XP: 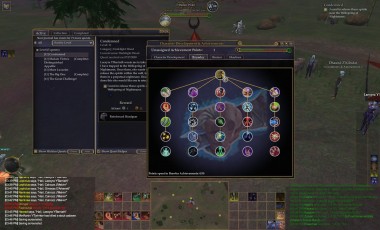 One of the three tabs of the achievement window

My first thought was, “So I should have not done all those quests, or explored those areas, or killed those named NPCs, that I did before I hit level 10?”Â Â Why did it penalize me for that?

I do recall seeing message about the race and character traits that you get to pick at certain levels, so when I pressed L, I was not completely overwhelmed by the UI.Â Â Though there are a whole lot of different options to choose from, and no indication of being able to swap them around.Â Â I did not want to spend my point until I was very sure about what I wanted, but how would I know?

(edit: when I hit level 12 a tutorial hint popped up telling me that I could have points refunded at an npc)

I did get some advice on customizing the EQ2 UI, and while the game does not embrace modding as much as WoW or Runes of Magic , I was able to at least get things positioned the way I like. (at least when I am soloing).Â I have no clue how well the UI works when grouping of Raiding, but I suspect I would learn to adapt. 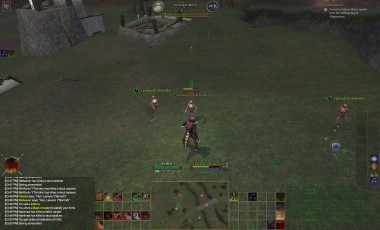 A quick shot of my UI in solo combat

Thus far the only exposure to any sort of trade skillÂ came with a few fishing quests.Â These were quests in which I simply had to click on a fish pool in attempts to gather fish.Â I did not have to buy a pole or equip anything special, just click on node and wait.Â I think tried to gather from other nodes , and I could.Â It appears you can gather from any node as long as your matching gathering skill is at a high enough level.Â So a single character could be able to gather from all types of nodes.

While the game has presented me with gathering and collecting of crafting materials, I have not yet had any exposure to the actual crafting of items.Â I am hoping that will come in my next session of play, though I find it odd that they have waited this long to introduce me to it.

I have also not seen an actual city yet, nor a banker, auction house, or home.Â I am thinking that along with crafting those things should appear very soon.